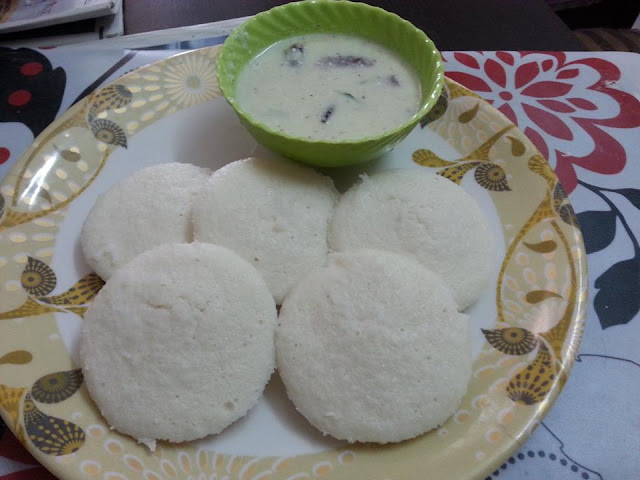 You must have seen Idli's been frequently prepared in a south Indian house, as I come from a south Indian background, this was one of my favorite breakfast but during childhood days I used to feel as if this was a difficult dish to prepare but after marriage when I properly  learnt I realized that this is such an easy recipe and can be cooked frequently. Fresh soft Idils tastes great with coconut chutney and sambhar(I love it with chutney though), so here goes the recipe.

Step 2:Now grid both Idli rice and Urad in fine paste (put half cup water when grinding) and also grind cooked rice and mix all the paste in one big bowl and keep it for 6-7 hours.

Step 3: Now grease the Idli mould and put the paste in the mould, now put some water in cooker and keep the idli mould in the cooker and close it without putting the whistle.

Step 4: Now cook it in high flame for 5 min and 10 min in low flame, now open the cooker and remove the idli mound and let it cool down little so the idli come out smoothly.

Step 5 : Your fresh and soft idli's are ready to be served with coconut chutney or sambar! Isn't it an easy recipe? Go for it and enjoy!

For more recipes go to https://anuslaboratory.blogspot.in
Posted by Anu at 02:31:00